There is hardly anyone in Germany who still opposes the consensus of the Paris climate agreement. It obilgates us to limit global warming to 2 or better still 1.5 degrees. A central element of this agreement is therefor the energy transition. However, despite agreement that we need a climate-neutral energy system, the way to achieving this goal has not yet been clearly defined. The demands – for example, those of the European “Green Deal”, the German Federal Ministry of Economics and Energy or the Fridays for Future movement – differ markedly.

This is why Fraunhofer ISE’s study “Ways to a climate-neutral energy system” attempts to contribute to an objective discussion. By modelling the energy system, it allows us to understand how the system’s conversion would have to proceed in a cost-optimized way year after year. Overall target for the calculations is to save at least 95 percent of energy-related CO₂ emissions by 2050. This approach would then be compatible with the 2°C target. In order to meet the 1.5°C target the study shows that even more and faster adjustments would be necessary.

Society’s behaviour plays a decisive role in this respect. We have therefore analysed various scenarios of social attitudes and behaviour with regard to the energy system transformation by changing boundary conditions (see this blog post, among others). But no matter which future scenario, on average some objectives emerge. We would have to achieve some of these by 2030, in order to have a realistic chance of achieving a climate-neutral energy system. According to the study’s calculations, we need to implement these five points in the next ten years in order to have 95% compatibility. However, the rule of thumb is always: the sooner the better, in order to be able to achieve the 1.5°C as well:

I. Rapid Reduction of CO₂ Emissions in the Power Generation Sector

For sector coupling to be meaningful, a CO₂ factor below 200g/kWh would be required for the production of electricity in 2030 (today around 414 g/kWh). To achieve this, the capacities of renewable energy sources must be massively expanded. This would mean doubling the current capacity of wind turbines and photovoltaics up until 2030.

II. Short-term Storage on a Grand Scale from 2025 Onwards

The expansion of fluctuating, i.e. not always available, renewable energies will increase the importance of both flexibility and storage systems in the energy system over the next five years. This involves “intermediate parking” of the electricity.

III. Large-scale Electrolysis from 2030 at the Latest

The use of electrolysis in the production of hydrogen from renewable energies in the GW range will also gain importance in ten years’ time. An environmentally friendly, “green”, production of hydrogen will then be used in the industrial and transport sectors (such as shipping and freight transport). The first pilots and demonstrators represent the starting point for this process.

By 2030 at least 15 million gasoline and diesel vehicles in Germany should be replaced by electric vehicles. In addition, other transport concepts, such as public transport or rail transport, must also be further developed and used.

V. 12 Percent of All Installed Heating Systems are Heat Pumps

Also in the field of building heating a lot would have to be done by 2030. An increase in the renovation rate to at least 1.5% per year and a parallel expansion of heating networks. In addition an increase in electric heat pumps is necessary. Heat pumps – which will become the primary heating technology – must already account for 12 percent of all installed heating systems by 2030. The reason being that they integrate well into a renewable system by using electricity. 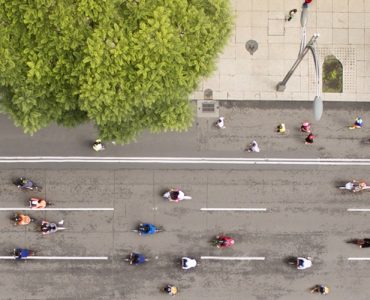