Germany’s electricity mix from 2009 to 2019: This is what we get from our sockets

This year the German Renewable Energy Sources Act (EEG) has turned 20 years old. In the meantime, the former utopian idea of establishing a CO2 neutral energy system has turned into a realistic scenario. Even the English-language Wikipedia no longer makes the effort to translate ”the German Energiewende”.

The Fraunhofer ISE Energy-Charts document and illustrate this restructuring. Where do we stand, where are things going well and where are problems? We have reduced the zoom factor and compiled a comparison of the net electricity output – the electricity mix that comes out of the socket at the end of the day – of the past eleven years.

Since 2009, the net electricity generated from renewables has more than doubled, from 18.5 percent to 46 percent. This puts it ahead of fossil fuels, which last year contributed only 40 percent, for the very first time in 2019.

This turning point in the electricity mix is largely due to wind energy. Its share rose from only 8 percent in 2009 to just under 25 percent in 2019, making wind the strongest energy source in Germany! Most of it is still generated by onshore wind turbines, with around a fifth of the installed wind turbines located in the North and Baltic Seas.

Solar energy also recorded significant growth from one to 9 percent. Although this is also a great success, the German energy system would benefit from a higher share of solar energy production. This was demonstrated, for example, in 2018’s “summer of the century”: The share of renewable energies was significantly below the annual average in the summer months.

The reason being that there was hardly any wind and the lack of rainfall meant that hydropower also had a low output. The warm rivers made it impossible to cool conventional power plants sufficiently and the low water levels led to transport bottlenecks for hard coal. Under these conditions, solar energy would be the optimal energy source. However, the currently installed capacity is too small to compensate for the shortfalls in other sources – despite optimal weather conditions.

Nuclear power and brown and coal

The growth in renewable energies has completely compensated for the decline in nuclear power from 25 percent (2009) to 13.7 percent of net electricity generation in Germany over the past ten years.

Brown coal, considered the dirtiest source of energy, has held its own against all competition. The reason for this was the consistently low prices for the CO₂ certificates, which have lasted for many years. As a result of the low production costs, the export surplus had increased from 12 TWh in 2009 to 50 TWh in 2017 and 2018. Since the CO₂ certificate prices have risen sharply in 2018 and 2019, this situation is currently changing. In 2019, only 34 TWh were left. In 2019, brown coal still accounted for 20 percent of our electricity mix in Germany.

The share of electricity generated from hard coal fell from 18 to 10 percent. It could not hold its own against brown coal, although it has lower emissions.

Electricity generated from natural gas decreased by half from 11 percent in 2009 to 5.5 percent in 2015. Since 2016, the share stabilized at around 8 percent, only to rise again to 10.5 percent in 2019. Gas power plants can be regulated quickly and are therefore a valuable addition to renewable energies. They are still operated with fossil gas today and can later be converted to renewable gas.

For a more detailed look at this topic and to gain access to many other informative data and facts on energy generation in Germany, we invite you to visit the Fraunhofer ISE Energy-Charts.

He studied Electronics at the University of Karlsruhe and received his doctorate from the same university in 2001. Since 2001, he works at Fraunhofer ISE where he set up the Department of Power Electronics, serving as department head up to 2013. Since 2011, he performs research on the visualization of energy data. Since 2014 he maintains and further develops the energy-charts.de, a site providing the current energy data, updated on an hourly basis, and visualized in user-friendly graphs and tables for public use. 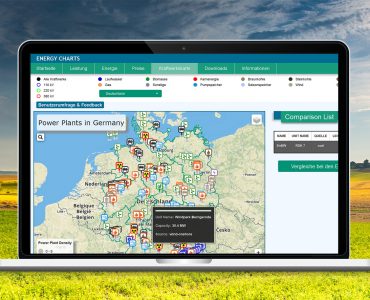